The purpose of the Barren Ridge Church of the Brethren is to affirm the love and work of God in His world. We believe in the life, death, and resurrection of Jesus Christ; we are called to be His disciples, sharing in a loving ministry of reconciliation, healing, and justice. We will trust the continuing guidance of the Holy Spirit to shape our witness and service, our nurturing efforts that include study of the Bible, and our fellowship and worship – so that every person may be brought into God’s presence as a mature individual in union with Christ. 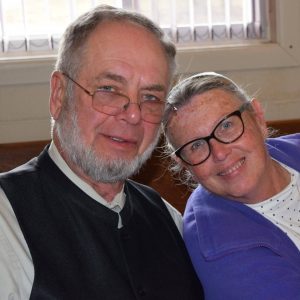 Pastors Henry and Janet Elsea joined Barren Ridge Church of the Brethren as our co-Pastors September 1, 2019. Pastor Henry was raised in Winchester VA and Pastor Janet in Culpeper. They have been married 40 years with 4 children and 7 grandchildren and have served Churches of the Brethren in Grantsville, MD, Harrisonburg, VA and Crimora, VA. Pastor Henry is actively involved in Brethren Disaster Ministries as a Project Leader, has served on the District Board and Standing Committee. Pastor Janet currently serves on the District Ministry Leadership Team and Standing Committee. She has also served on the Mission and Ministry Board at the Denominational Level and as District Board Chair and Moderator. Both bring a variety of gifts and experience and look forward to what plans the Lord sets forth.

The congregation has met and worshiped in three different buildings throughout its history, with various additions and renovations made at different times.

Throughout its history Barren Ridge has called forth and employed many prominent leaders, missionaries and pastors in the Church of the Brethren.

In its (150) years of operation, this congregation has provided significant and consistent ministry to the residents of the surrounding community. Because of the dedication of its membership thousands of people have been touched and challenged by the saving Gospel of Jesus Christ.

Barren Ridge is a congregation with a rich history and a great potential for continued significant service and leadership in the Kingdom of God, in the community, and in the world.
-Taken from Homecoming Bulletin, May 1990

Below is a chronology of events: